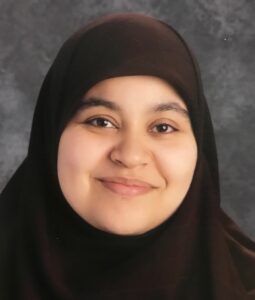 Ms.Ibrahim is an experienced and certified educator who has taught Arabic, Qur’an, and Islamic Studies for the past 13 years to adults and children, native and non-native. She is proud of being part of Tarbiyah Academy for sixth year. Ms.Ibrahim is a mother of 4 kids, she was born in Germany and grew up in Egypt where she got her education and started her teaching journey.

She graduated from AL-Azhar and attended Dar-Al-Alloum in Egypt where she got her bachelor’s degree in Arabic language and Islamic Studies. Ms.Ibrahim has 2 master’s degrees. The first master is in Qur’anic science from Minnesota Islamic University 2017. The second master is in Islamic Law (Fiqh of Muslim Minorites) department of Islamic studies, Minya University, Egypt 2020.

Ms.Ibrahim has the highest certificate in Qur’an Qiraa’at (2 different ways of reading Qur’an in the original Arabic language) and Quran studies from Al-Azhar Al-Sharif (Institute of Qur’an Qiraa’at) (Egypt). She has the “Sanad” (ijazah) -linked to the prophet (PBUH- in 2 different ways of recitation) (Hafs and Warsh narrations). Getting these degrees with the gained teaching experienced have helped her to become a better teacher and curriculum designer. She loves working closely with children and build the personal trust to reach their hearts.

In 2011, she moved to Japan where she started teaching the Arabic, Qur’an, and Islamic studies in Hiroshima Islamic Center to the non-Native Arabic speakers. In 2015, She came to US and joined Tarbiyah Academy at that time. then, Ms. Ibrahim enjoys working at Tarbiyah Academy (TA)  as she sees that the TA mission well align with her personal philosophy. What she loves about TA is the creative environment and the team efforts that encourage her to make a change in our future leaders.

Some of the learner profiles that she feels it is really attached to her are inquirer and knowledgeable. Ms.Ibrahim loves learning and teaching, and these are the most exciting things that she enjoys doing. What is inspire her the most is Allah’s reward for those who learn and teach; (Uthmān reported the prophet PBUH as saying, “The best among you is he who learns and teaches the Qur’ān.